A Sip Becomes a Drag 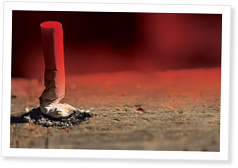 The anti-sugary-drink movement grows as an increasing number of lawmakers propose measures similar to those used to curb smoking.

Soda is going the way of the cigarette.

The number of cities, states and countries considering a legislative measure targeting sugar-sweetened beverages is growing. From taxes to health-warning labels, the efforts mimic the American anti-tobacco movement that began in the 1950s. And while soda and cigarettes aren’t identical, comparing the two is an easy task.

“They’re not equivalent, but they share similarities in that neither of them are necessary, and both of them have been marketed heavily and (disproportionately) to minority populations,” said Michael Long, assistant professor in the Department of Prevention and Community Health at The George Washington University’s Milken Institute School of Public Health.

Nearly 20 jurisdictions worldwide levy a tax on sugar-sweetened beverages (SSBs) in some way, shape or form—or have recently passed tax legislation, such as the U.K. Of these places, Mexico might be the most well known. It implemented its so-called soda tax on Jan. 1, 2014, in an effort to curb its soaring rates of overweight, obesity and diabetes, among the highest in the world.

But despite all the publicity, Mexico wasn’t the first jurisdiction to pass an SSB tax. Finland, France, French Polynesia, Hungary, Mauritius, Norway, Samoa and Tonga all had a form of such a tax before 2014. And following Mexico’s lead were a host of other places, including Berkeley, California, and Philadelphia, Pennsylvania.

“There’s movement throughout the world to do soda taxes,” said political strategist Larry Tramutola, based in Oakland, California.

Tramutola helped Berkeley pass its tax and is helping San Francisco renew its efforts after the city failed to pass such a tariff in the past.

Policy makers have also proposed health-warning labels for SSBs, though in far fewer numbers than those who have proposed taxes. Both approaches bring similar ire from the beverage industry. San Francisco is in the midst of a year-old lawsuit brought by the American Beverage Association over its ordinance requiring warning labels on ads for sugar-sweetened beverages: “WARNING: Drinking beverages with added sugar(s) contributes to obesity, diabetes, and tooth decay. This is a message from the City and County of San Francisco.”

At the state level, California Sen. Bill Monning has introduced legislation three times that would have required labels directly on the beverage. Each attempt failed. He’s vowed to continue pursuing the effort, the first of its kind in the country. Both New York state and Baltimore, Maryland, have modeled similar proposals on Monning’s bill.

“First off, I don’t think this issue goes away. I just don’t see that,” Tramutola said. “More and more people … are going to look at this as something that should be done and discussed. The whole dialogue around this is worth all the effort (being) put into it.”