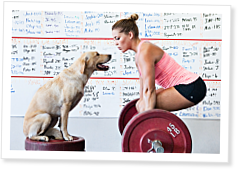 The mechanics-consistency-intensity progression works whether you’re training dogs or beasts of the barbell.

Everything changed when I put each lifter on the platform alone with the group watching.

In the final week of a two-month focus on the snatch and clean and jerk, I had athletes list three snatch attempts based on confidence and form: “What are you 90 percent certain you can lift well every single time?” The goal was to use sure-thing loads and add a bit of pressure so athletes might know what a weightlifting competition would feel like.

Some of the athletes made all attempts, but about half missed at least once, and a few missed twice. To my greater surprise, each athlete showed form variations I didn’t expect after seven weeks in which the lifters had eliminated many errors and become much more consistent. For 14 sessions in a row we had drilled mechanics, and technique had improved across the board. But when the athletes were alone on the platform with submaximal loads, many old errors came back.

Perplexed, I did what any intelligent coach would do: I talked to my dog about it.