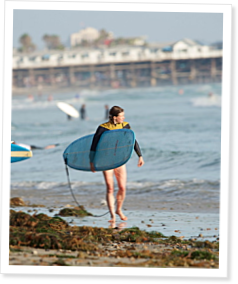 San Diego has the highest concentration of CrossFit boxes in any metro area, so finding a CrossFit affiliate in the Southern California city is easy. But at some point we need to leave the gym—or so we’re told. If you find yourself in the sunny city just 18 miles from the Mexican border, we’ve got a guide to some of San Diego’s best places for eating, drinking, shopping and outdoor fitness.

San Diego is the eighth largest city in the United States and a mecca for craft beer, biotech and cutting-edge science, but it still retains a low-key beach-town vibe. For men, dressing up for dinner means wearing the fancy flip flops and your nicest pair of jeans. For women, sundresses and tank tops are acceptable attire almost everywhere. San Diego is a city of morning people, not night owls. Most people turn in early so they can get outside the next day to surf, cycle, hike or just enjoy the weather.

A word on weather: San Diegans have very little patience for less-than-perfect weather and will complain bitterly about two days of rain or a week of temperatures below 75 F. The metro area has one of the least affordable housing markets in the U.S., so San Diegans regard the weather as their reward for such steep prices.

When meeting a new person in San Diego, don’t ask, “What do you do?” That question is for New York or Los Angeles. “What do you do for fun?” will be met with much more enthusiasm. Unless stationed here with the military, most people chose to live in San Diego because of the weather and laid-back lifestyle, often prioritizing location over climbing the corporate ladder. It’s not that the city is filled with Spicoli-like slackers—successful entrepreneurs and brilliant scientists are everywhere. However, in this strong “work to live” culture, people make an effort to separate their work and home lives.

Even if the street is empty, wait for the light before crossing because police are very generous with their jaywalking tickets.

Finally, be prepared to pick a favorite taco shop and defend its merits vigorously against all others.