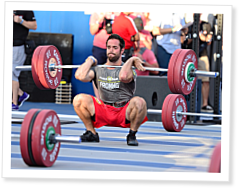 The snatch and clean and jerk can safely be used for conditioning—and have been for years.

A tremendous amount of criticism has been leveled at high-rep Olympic weightlifting.

Much of it comes from a variety of sport-specific coaches—often vocal weightlifting coaches and personal trainers who state that doing higher repetition snatches, cleans, and jerks is not effective in application and likely dangerous. In their opinion, no one can perform these lifts with proper technique in higher repetitions because of fatigue-generated technique errors.

In fact, some coaches suggest the Olympic lifts should not be used to train anyone other than elite athletes.

The issue arises in discussions and in the media on a seemingly regular cycle. Let’s consider it from two angles:

1. What position do some of the best coaches in the world take on high-repetition weightlifting?

2. Is there any evidence to suggest that higher repetitions are ineffectual or dangerous?