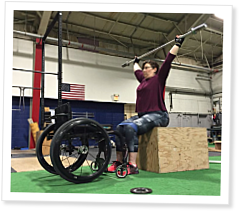 Theresa Couture uses CrossFit to rebuild her body after suffering a stroke.

Theresa Couture fell out of her wheelchair in her kitchen, sending the chair flying across the room. As she lay there, home alone, she knew she didn’t have the strength to drag herself to the chair and get back in it.

“That was the final straw for me,” said Couture, who has mitochondrial disease (mito), which manifests itself through dysautonomia, strokes, muscle weakness, and neurological and stomach issues.

She decided to give CrossFit a try in October 2015—with the goal of being able to get back in her chair from the floor.

“Now I get out of my chair and onto the floor and back into my chair without assistance,” said Couture, a founder of the nonprofit MitoAction, whose mission is to improve the quality of life for everyone who lives with mitochondrial disease.

Couture has been wheelchair-bound since March 23, 2015, after her last stroke. She has had strokes before and always recovered, but this one was different: It left her unable to move her legs because the area of the brain that helps her move took the hit.

“I could feel my legs but I couldn’t make them move,” Couture said.

Couture started physical therapy right away after the last stroke. Meanwhile, her daughter, Brianna, who also has mitochondrial disease, was doing CrossFit and making wonderful strides. She encouraged her mom to give it a try, telling her she could strengthen her arms, core and back.

“You always taught me you can’t live like you’re waiting to die,” Brianna told her mom.

With the kitchen incident burned into her mind, Couture headed to CrossFit Wingman in Agawan, Massachusetts, for an interview. The first things she noticed were handicap parking and a handicap ramp—both great signs. One of the coaches, Aaron Zanchi, interviewed her—and she interviewed him.

“He asked me (about) my goals, what I could do from the chair, and (for) information about how my disease impacted me,” Couture said. “As a former ICU/trauma nurse, I was duly impressed. He was educated, welcoming, thoughtful, and proactive in his interview and in his approach to developing a plan.

“What was new for me was the focus on what I could do, not what I couldn’t do. That’s a different model. That question brought it positively forward.”

Zanchi spent two weeks working privately with Couture first to establish her baseline and see what she was capable of before she started attending group classes and working with another coach. Couture’s coach, Zachary Betta, explained CrossFit is universally scalable, inclusive and adaptable to athletes of all abilities.

In December, after just two months of CrossFit three times a week, everything was different from when Couture started, Betta said. In the beginning, Couture was using 2-lb. hand weights and her movements were very, very small. She also didn’t get out of her chair at all. Just two months later, she was lifting a 45-lb. barbell. And she got out of her chair, got on the floor, did adaptive sit-ups, got back in the chair and went to the next station.

She even stood up out of her wheelchair—twice—on her own power, an accomplishment chronicled in a video taken by Betta and posted on the CrossFit Wingman Facebook page. As of press time the clip had almost 900,000 views.

Previously, Couture had been unable to stand or walk, with even the smallest movements resulting in severe muscle spasms and tremors. But because she’s so much stronger now, she stood up with no leg spasms at all.

“That moment was in the middle of a workout when she was tired,” Betta said. “It was an amazing moment for all of us.”

Couture admitted that some days her workout is just getting dressed, transferring to her chair, getting in and out of the car, and getting into the gym.

“On those days, I cheer on others. But I don’t let it get me down,” she said.

Betta has learned to read Couture’s demeanor when she comes in the gym and adapts the day’s workout accordingly.

“If she has lots of energy, I know it’s a good day and she can work hard and make progress,” he said. But he also knows if she works hard one class, she may be tired the next. On those days, they will work from the chair to increase her competence and strength in the chair.

Betta agreed: “Every time she comes in, she does something new. Her adaptability is incredible. And a big piece is her attitude and unwillingness to give up. She works her (butt) off. She has never missed a day. She’s been this ball of positive energy. I’ve never seen her be negative about anything.”

Her coach also noted Couture is close with a regular group of workout partners—something very common in CrossFit gyms.

“The power of community helps me feel engaged; it helps my body, mind and spirit. You need a community of people to lift you up when you’re feeling down,” Couture said.

Any endurance or fitness athlete is familiar with the term “mitochondria” because the tiny cellular component is solely responsible for all the energy we need for proper cell, organ and body function. In addition, mitochondrial adaption to high-intensity exercise training is known to be responsible for improvements in VO2 max and lactate threshold.

“The benefit of exercise for patients with any chronic disease seems logical since it may improve overall physical and cardiovascular conditioning,” said Dr. Eduardo Balcells, cardiologist with Mountain States Health Alliance; CrossFitter at Iron Mountain in Abingdon, Virginia; and father of a child with mitochondrial disease. “Patients with mito, however, have dysfunctional mitochondria and are therefore unable to effectively produce ‘cellular energy,’ which then affects body parts such as muscle, brain and GI tract—all of which are energy-demanding organs.

“In the mito world, people give up on being active,” Couture said. “The fear of something bad happening keeps people from living their life.”

Before the wheelchair, Couture said her life was very small: Fatigue would prevent her from performing everyday tasks such as going to the grocery store. Thanks to CrossFit, Couture now lives a full, strong life.

“I’ve become more safe (in the wheelchair). It’s empowering me to have a positive life. I feel more engaged in my life,” she said.

She added: “Exercise is hard for mito patients, but little activities over time add up to big gains.”

Couture encouraged mito patients to find an activity they love and do it.

“It’s counterintuitive to think that the less you do, the more you’ll be able to do. You have to keep moving. Your body loves motion, even if you have mito. You have to behave (in) your life as if you’re going to live. If you don’t do that, you set yourself up for failure. You have to re-engage in life to become a part of life.”

She continued: “Embrace life. When life kicks you, regroup, reorganize and start again. Keep moving forward. Do what you can do and do it to the best of your ability.”

About the Author: Ginger DeShaney is director of operations and support for MitoAction, a nonprofit organization whose mission is to improve the quality of life for children, adults and families living with mitochondrial disease through support, education, outreach, advocacy and clinical research initiatives. DeShaney was a journalist for 24 years before joining the nonprofit ranks. For more information about mitochondrial disease, please visit Mitoaction.org.