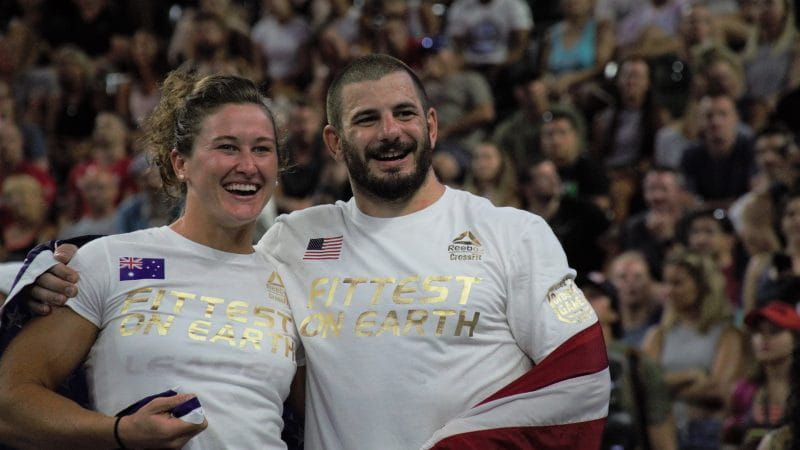 Shane and Tia moved to Cookeville in September last year to aid with her training following the changes in the CrossFit world. Since then, 4-time defending CrossFit Games champion Mat Fraser has started training with them.

“Shane will program for Mat and myself on a daily basis,” Tia told BOXROX in an interview. “Shane gets to see us both on a daily basis, is constantly around and he’s programming and coaching us and making sure if there’s something we might need to dial in on, like our movement patterns for example, he’ll let us know,” she continued.

The Australian couple will meet Fraser at the gym and do their morning or afternoon session together, depending on how they’re feeling and what the training is like. After a rest, they’ll go back to the gym for another four or five hours; there’s always quite a bit to tick off the training list.

“I think it’s quite entertaining for him sometimes because they’ll be times when Mat and I can get quite competitive,” she said about Shane coaching both CrossFit Games defending champions.

“He’s not always just stuck with me,” Tia joked about Shane now coaching Fraser as well. “There might be some times where I might be complaining a little bit but Mat and him just stand up for each other. Shane really enjoys it and I think the fact that Mat’s in it 100% and he’s always putting his best foot forward – Shane appreciates that.”

But the coach is not the only one happy with the new arrangement. The three-times Fittest Woman on Earth truly enjoys having Fraser around. “It’s really quite cool just to be able to have his level of experience right there with me,” she said, acknowledging that she has definitely learnt from him. “The boys tend to gang up on me a little bit so I’ve always got to defend myself, but I absolutely love it,” she laughed. “He’s really become quite a brother to me and it’s very special, being able to do what we do.”

Prior to Tia training together with Fraser, Shane used to work out next to her (or nearer a corner if he didn’t want to slow her down). “Shane would literally do everything with me. He’d be doing it right by my side,” Tia said. “As Mat’s come onboard and is training right beside me now, he [Shane] doesn’t feel like he has to be there to push me or physically be going through the pain with me. Which, when you think about it, that’s quite nice.”

Shane is now able to watch both athletes during their session and coach them more. Yet, he still gets his fitness in: “Surprisingly – and he’ll always deny this, he’s a very humble person – he’s actually a really good athlete. He’s very strong and he’s very determined,” Tia said.

“If I told him ‘Shane this is not possible,’ he’d literally just start the clock and do it to prove me wrong. He is very fit as well. A lot of people don’t realise that he’s actually a very good athlete himself, but he’ll never admit it.”

Shane doesn’t switch off; he’s constantly thinking of new things that he can incorporate into the training program, trying to figure out what he can challenge both athletes with next and is completely dedicated to helping them improve.

“I think he really appreciates having Mat and myself there; that we’ll do the work and he knows that we appreciate it, even if we don’t say it on a regular basis,” Tia said.

Find out what Mat Fraser thinks about his new coach: