The Will to Walk 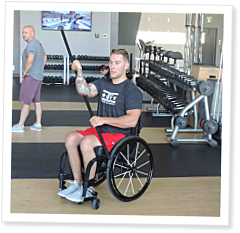 The 2016 Reebok CrossFit Games are playing live on a big-screen TV in the weightlifting area of the gym, so the athletes take uncharacteristically long breaks between sets of squats to catch a heat of Squat Clean Pyramid.

One man in the corner of the gym isn’t paying any attention to the Games. He goes out of his way to avoid turning his head toward the screen.

The athlete who finished 21st at the 2015 West Regional is at the gym today to stretch his hip flexors, to practice standing— with assistance—and to rebuild core strength and stability that deteriorated rapidly after a construction accident left him a paraplegic in September 2015.

Bernier hopes working his core and putting his body through the motion of standing up will help him if the day ever comes that he can walk again.