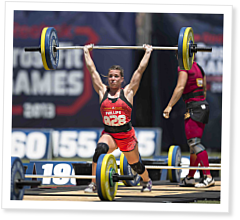 The jerk is a lot like Nobuyuki Kayahara’s “Spinning Dancer.”

Some see the silhouette spinning clockwise, while others see counter-clockwise movement. The effect of the optical illusion is so profound that the brain struggles to grasp how the reversed movement would even be possible. Look at the silhouette again and you might see that the movement has somehow reversed.

The jerk is all too similar.

Some athletes intuitively understand that the jerk is about moving the body around and under the barbell. Other athletes perceive with certainty that the bar must be driven upward. In reality, both are correct to a degree—just as the illusion spins both ways. The problem comes down to timing.

Look at almost any heavy jerk—here’s 264 kg courtesy of Aleksey Lovchev, doping violation notwithstanding—and it’s clear the bar is driven up and received above the height of the rack position. Watch again, and it’s clear the lifter’s body is driven downward in a lunge that’s lower than his standing height.

With reference to the Lovchev jerk linked above, pausing the video at the rack position and the receiving position reveals that the bar indeed goes upward a few inches—but the lifter moves downward to a much greater degree. Indeed, it would be pointless to use the dip-drive if it didn’t elevate the bar at least a little. But comparing distances of travel shows downward movement of the athlete is more critical than upward movement of the bar with heavy loads. And watching the jerk in slow motion shows that most of the upward momentum on the bar is imparted by the legs long before the arms come into play. Essentially, the leg drive buys time for the athlete’s arms to push him or her under the bar.

“You never push the bar up. That’s the point I’m trying to make. The acceleration of the drive is what keeps the bar up, and then you push your body down with fast hands,” Mike Burgener of CrossFit Weightlifting explained. 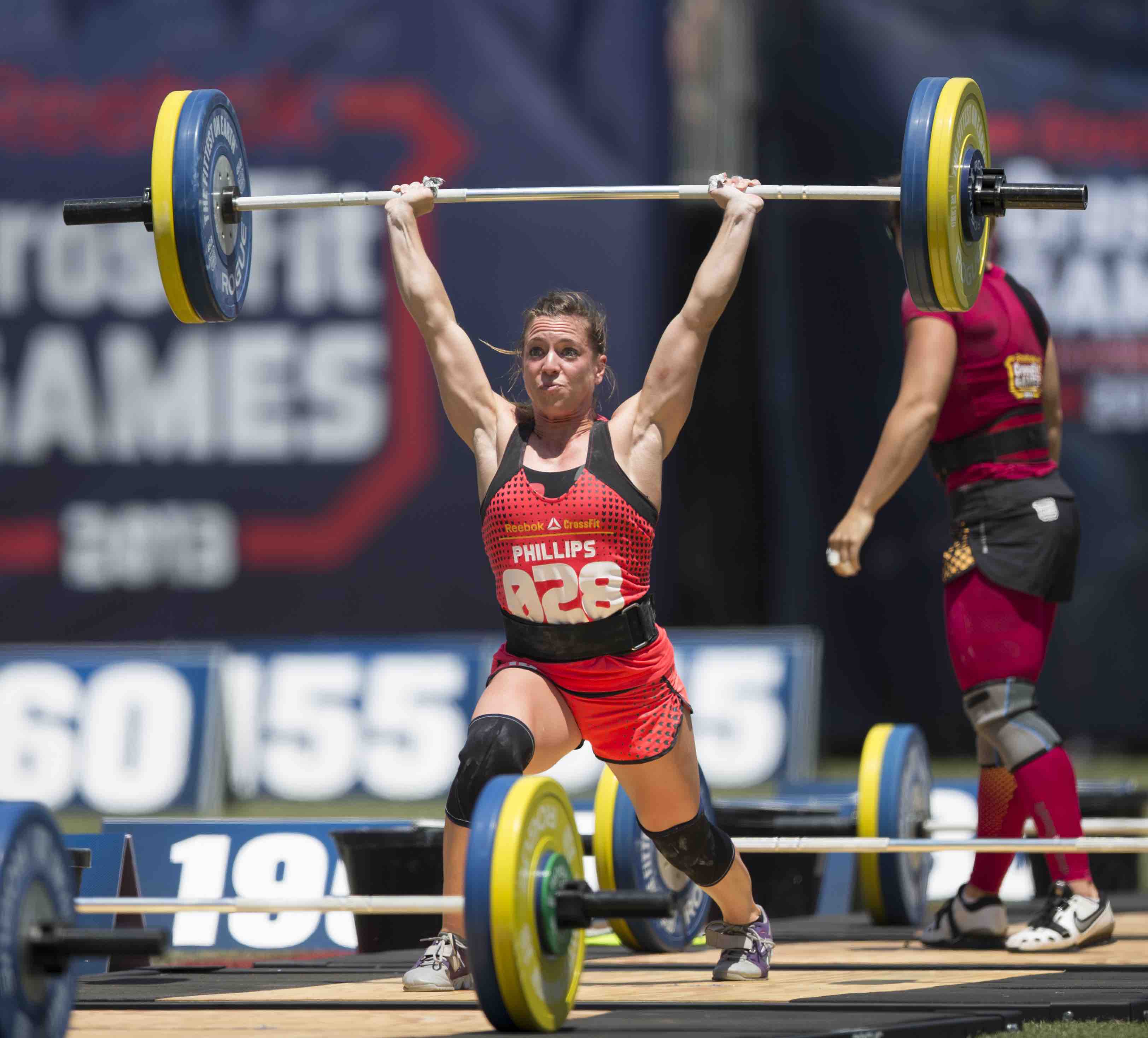 Fast hands ensure an athlete drives herself down to lock the elbows under the bar.

The principle is as follows: An athlete drives with the legs to accelerate the bar as it moves upward and off the shoulders. When the athlete’s feet leave the platform to move to the split position, it’s impossible to add significant additional upward force to the bar. Watch Lovchev’s head: It starts to descend with speed the moment his feet leave the floor to move to the split position, meaning his arms are driving him downward rather than driving the bar upward.

Imagine you’re standing in a canoe next to a yacht. You take a pole and push hard against the yacht. The yacht might move imperceptibly, but your canoe will move several feet away from the yacht. It’s the same with the jerk.

“It’s the idea of creating acceleration through the dip and drive and then not pushing the bar up. I’m off the ground. How can I push something up if I’m off the ground? It’s not a push press,” Burgener explained.

If athletes don’t understand the concept—and many do not—they’ll routinely alter the mechanics and timing of the jerk in an attempt to push the bar higher. At lighter weights, the lift will be successful, if ugly, but certain heavier loads will require a press-out to achieve lockout—illegal in weightlifting competitions. At the heaviest loads, the jerk will be impossible as the athlete simply won’t be able to generate enough height to accommodate poor mechanics and timing. 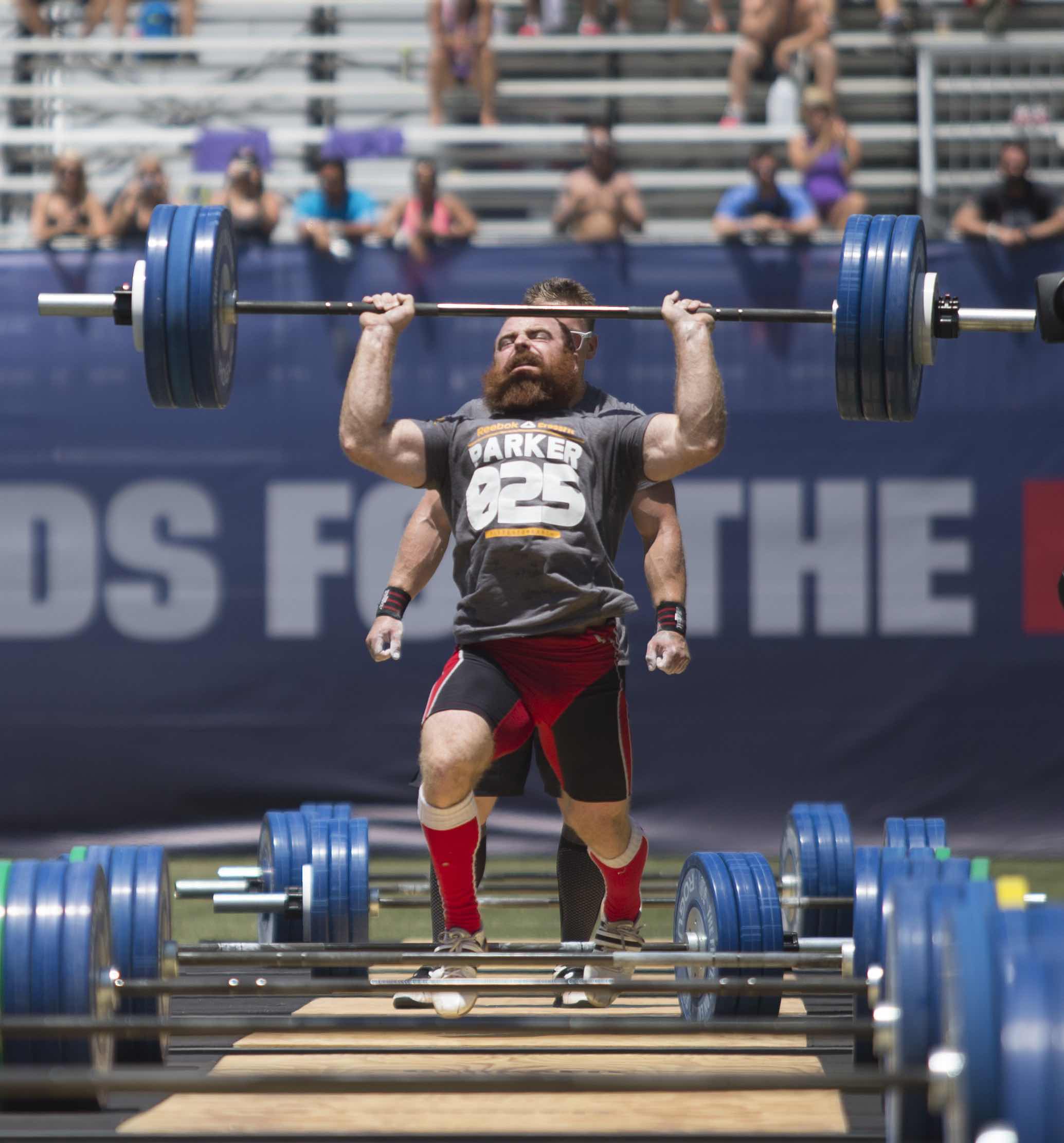 When the feet are off the ground, the athlete pushes hard against the bar to drive downward into the split receiving position.

Most coaches are familiar with athletes—often very strong pressers—who see no point in dropping under a bar. These athletes fixate only on upward movement of the barbell. Their light jerks fly off their shoulders, their heavier jerks are pressed out, and their heaviest jerks fall to the floor as the athletes fail to put themselves in a position where they can get under the weight.

At its root, the error is conceptual: The athlete wants to drive the bar upward only. Mechanically, the error starts with footwork. Athletes who want to drive the bar upward treat the jerk like a push press, keeping the feet in contact with the floor far too long in an attempt to employ the arms to elevate the bar. The split under the bar is an afterthought that happens far too late. The critical moment of weightlessness missed, the athlete’s feet are now bearing too much load to allow them to come off the floor to properly jump to the split receiving position.

“Most people who don’t move their feet, they’re going to be pushing the bar up more. When you move your feet, you’re driving your body down, and that’s the key,” Burgener said.

With the barbell moving straight upward—even to a very small degree—courtesy of hip drive, the lifter is unloaded for a brief second and can remove the feet from the platform to swiftly place them in the receiving position. When the feet are off the platform, the lifter has a heavy object—the bar—for use in pushing him- or herself downward. But heavy bars succumb to gravity very quickly, so the upper body must be even faster to push the athlete into the right position.

“You want them to think, ‘Hands and feet at the same time.’ … Most times people will have too slow of hands,” Burgener said. 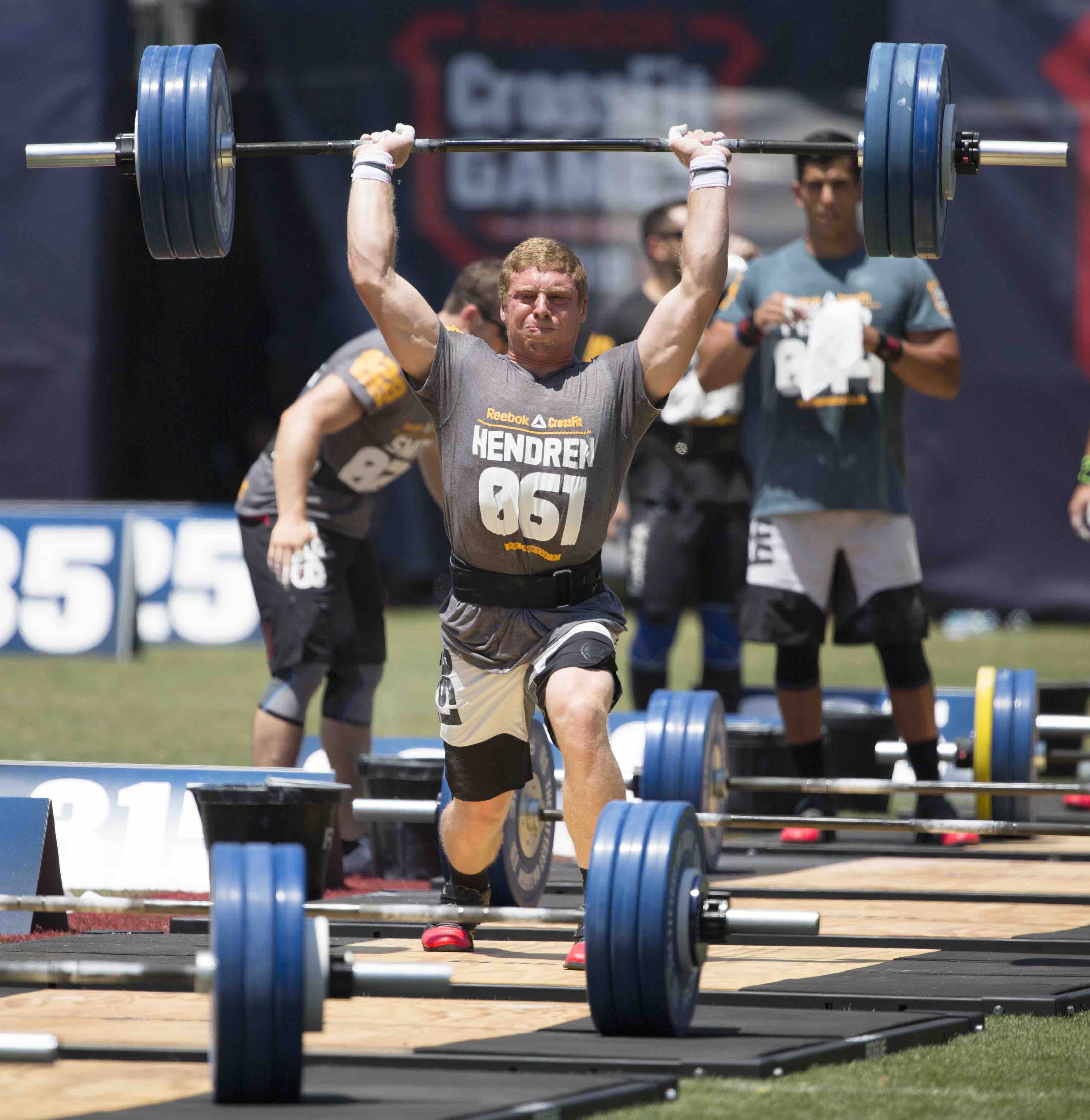 If timing is off, athletes will not be able to lock the elbows under the bar unless they drive it very high with the legs. With heavy loads, it’s impossible to move the bar high enough, and significant downward movement is required by the athlete.

Athletes who snap their feet into position but are slow with the arms fall prey to several errors. Press-outs and missed lifts are common with slow hands, and sometimes bars will crash on athletes whose arms are straight, causing a re-bending of the elbows on reception. This last error is tricky: The athlete indeed beat the bar down and got the elbows locked out, but the lockout was facilitated more by the speed of the lunge than by active pressure of the hands against the bar. In extreme cases, the athlete might even be pulling the bar downward to a degree, making reception very challenging. The solution: faster hands.

“It’s just a timing issue,” Burgener said. “They’ve got to learn to drive the elbows out and meet the bar. … We’ve got to teach him how to meet that jerk.”

Burgener uses the tall jerk to fix slow hands and help athletes understand they must move down rather than push the bar up.

In the tall jerk, Burgener has the athlete stand flat-footed with a very light bar held at the forehead, about a half-inch above the hairline. With no dip whatsoever, the athlete must move the feet to the split position while driving the body down with the arms. Most will want to cheat the movement by sneaking in a dip that allows them to drive the bar upward.

“They don’t want to engage the arms. What I’ll do to prevent that from happening, I’ll make them go up on their toes and do the same thing. Now it’s very, very hard for them to dip.”

With no upward movement of the bar to assist the athlete, he or she must use the arms only to drive down under the bar. The hope is that the athlete begins to understand how fast hands and elbows drive the movement while the feet are off the ground.

Burgener said he’s looking for the ah-ha moment in which the athlete finally begins to understand the finer points of the lift.

About the Author: Mike Warkentin is managing editor of the CrossFit Journal and founder of CrossFit 204.