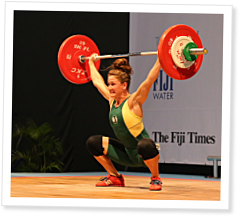 Of the 14 women who train as full-time weightlifters at Waxman’s Gym outside Los Angeles, 10 of them began as CrossFit athletes.

“That tells you everything you need to know as far as CrossFit and weightlifting,” said Sean Waxman, owner and head coach of the California facility.

His gym reflects CrossFit’s effects on Olympic weightlifting as a whole. The training methodology’s popularity has helped drive growth and dispel misconceptions in the 125-year-old sport, said weightlifting representatives in Australia, Canada and the U.S.

“It’s a very symbiotic relationship, even at this stage where there’s no mixing of the organizations,” Waxman explained.

He continued: “It’s breathed life into my business, so I’m very happy for it and grateful for everything.”

Over the course of four years, USA Weightlifting’s growth has been exponential.

“That’s where we’ve seen it—in the number of weightlifters,” said USAW CEO and General Secretary Phil Andrews. “We’ve seen a lot of impact from the world of CrossFit, and I think it’s been a part of—a big part of—the reassurance of the sport of weightlifting.”

Andrews, who had been serving as interim CEO since January, became the organization’s CEO in April. He had previously served as USAW’s director of events and programs for nearly three years. 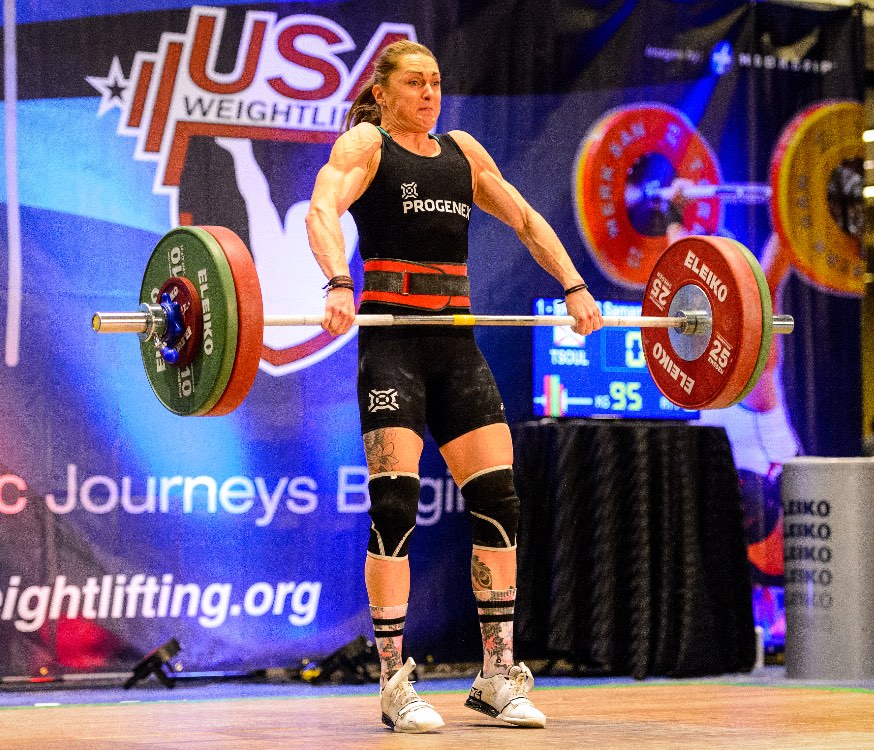 It’s now common to see top CrossFit athletes holding their own on the platform.

“CrossFit as a whole has been welcoming to the weightlifting community,” Andrews said. “We are two different sports, but there’s a large enough crossover that it has affected us, and we’re delighted. The more athletes, the better. And the more coaches, the better.”

But, Andrews noted, it’s not just the sheer number of lifters—it’s also the talent pool that CrossFit has fostered.

He named several competitive weightlifters with CrossFit backgrounds: Maddy Myers and Morghan King. Myers competed as an individual in the 2015 Reebok CrossFit Games and has since set American junior records. In August, King broke a 16-year-old American record in the snatch as a 48-kg lifter at this year’s Olympic Games in Rio de Janeiro, Brazil.

“We want more talent. We need more talent,” Andrews said excitedly. “We won a medal in Rio. We want more. … We need to have people pick up a barbell, and a lot of people are doing that through CrossFit.”

Myers and King are among multiple elite-level female athletes who have competed in CrossFit as well as national-level weightlifting competitions in the U.S. Others include 2013 Reebok CrossFit Games champion Sam Briggs, Cassidy Duffield and multi-year Games competitor Lauren Fisher.

CrossFit, Andrews said, has made it “a social norm for a female to pick up a barbell. And I think that’s huge for us.” 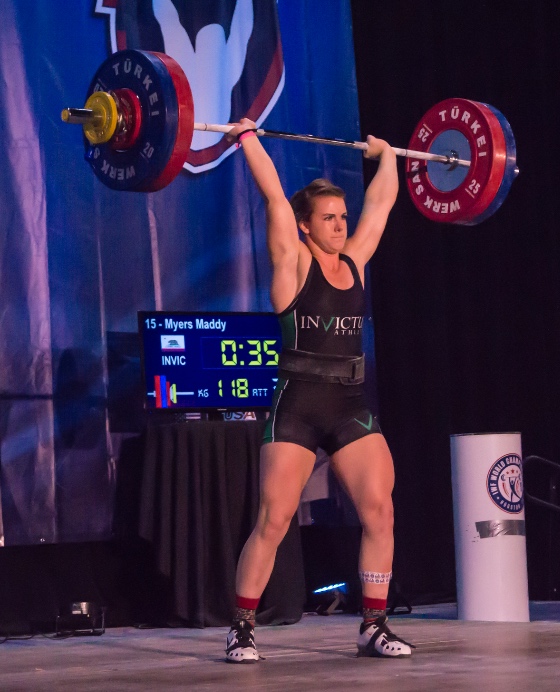 Maddy Myers competed in the 2015 Reebok CrossFit Games and has since set American junior weightlifting records.

In Australia, too, participation in weightlifting has increased.

The country always has had “pretty good” participation across both genders, he noted.

“The other thing, too, is CrossFit has broken down some of the misconceptions about weightlifting and weightlifting exercises,” Stuart said. “I suppose it’s the thing when little Johnny wants to go do weightlifting and mom and dad say, ‘Yeah, I’m part of the CrossFit community … it’s not going to have a negative effect on my child.’”

The more lifters, the better, he added.

“Just the fact that people are getting involved in sport is the real winner,” Stuart said.

Over the course of roughly four years, Damon Kelly has seen people’s interest in the snatch and clean and jerk grow. Kelly is owner of Zenith Weightlifting in Queensland, Australia, and a two-time Olympian in weightlifting (2008 and 2012).

“It’s good to have a lot more people appreciate it, a lot more information out there.”

Like Waxman, Kelly has found more opportunities as a weightlifting coach since CrossFit’s emergence. He coaches 10-12 hours per week at CrossFit Torian, home to the Brisbane Barbell Club.

CrossFit and weightlifting, he said, can complement each other.

“It doesn’t have to be one or the other. You can do both.” 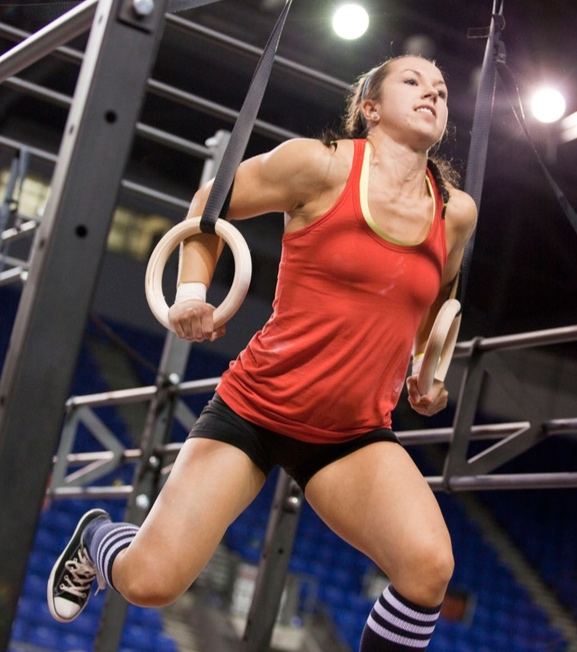 Rachel Siemens found weightlifting through CrossFit and is now a national champion.

In 2011 and 2012, she was a member of CrossFit Taranis’ team that competed at the CrossFit Games. Siemens hadn’t even heard of Olympic weightlifting until she started CrossFit in 2010 at the age of 22.

“(CrossFit has) brought a lot of awareness that it’s a sport,” she said. “People don’t assume I’m a bodybuilder now.”

Siemens added with a laugh: “They still think I’m a powerlifter.”

Lacey Rhodes’ experience has been similar.

“Still when I tell people I do Olympic weightlifting they say, ‘No, you don’t. You can’t,’” said Rhodes, who competed at the 2015 IWF World Championships and is a head coach at CrossFit Outlaw North in Ontario, Canada.

And while Siemens echoed Waxman’s statement that the two sports can have a symbiotic relationship with many athletes successfully competing in both CrossFit and weightlifting, she said there are limits.

“I don’t think CrossFitters could set a new world record (in weightlifting),” she said. “Prove me wrong—I think that would be awesome. But I think it takes a lot to set a world record.” 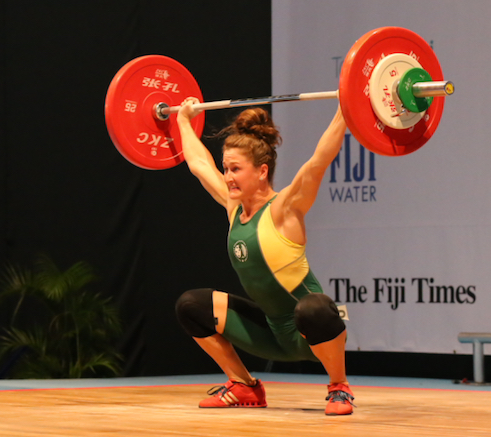 Tia-Clair Toomey finished second at the CrossFit Games in July and competed in the Olympics in Rio in August.

Tia-Clair Toomey, who this year placed second at the CrossFit Games for the second consecutive year, also competed on Australia’s Olympic team as a weightlifter in Rio.

The 23-year-old was criticized for her performance because she didn’t set any records and was not solely focused on weightlifting.

Those critics, Waxman said, are “making a big deal about nothin’.”

But at the end of the day, Toomey’s participation in both sports provides even more exposure for weightlifting, he continued.

“It’s another avenue for people who might not have seen weightlifting,” Waxman explained.

He added: “I think it’s a good ‘fuck you’ to people in weightlifting who have a stick up their ass about CrossFit.”

For his part, Andrews said he’d like to see USAW and CrossFit work more closely.

“In terms of athlete recruitment we certainly can be helped by CrossFit,” he said. “You almost can’t demerge CrossFit and weightlifting at this point. They’re so intertwined.”