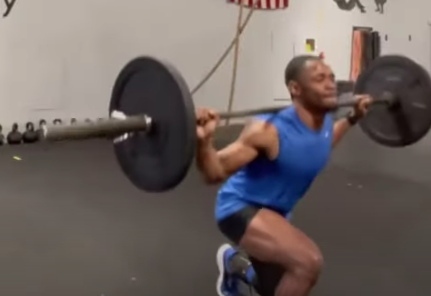 Anthony Finch is 26 and has been training with us at Unbreakable Athletics Academy for ten months now. He began training with us to be better prepared for his upcoming rugby seasons where he plays as a winger. Wingers are usually the fastest players on the team, and are elusive runners. Anthony is a dedicated and disciplined athlete, and he works on being explosive at all movements. You can often find him after class doing accessory work, working on his speed and power. Anthony has been very happy with how his training at UAA has positively impacted his results on the field. While he has always been athletic and involved with sports, when he joined us Anthony was nervous about performing new strength movements that he wasn’t familiar with. He credits the coaching and welcoming family atmosphere with his successes thus far. “Everyone has shown me endless amounts of support.” Anthony has found that he has improved in many areas physically, but the most improvement can be seen in his endurance and cardio. He is able to complete most wods RX and even RX+ which motivates Anthony to continue training and working hard. “I am enjoying seeing how far I’ve come in my time with UAA and imagining how far I can go if I stick with it.” When asked what his proudest accomplishment is this far at UAA, Anthony responded that coming out of his comfort zone and trying new workouts and strength movements has been major for him. For example, today was Anthony’s first time climbing the rope. It’s not a lack of strength that held him back, it was the uncertainty. With additional help from a coach today, he has now accomplished a new skill. Anthony has said days like today keep him consistent. The love and addiction of positive results will keep him coming back and working hard. “The work won’t be easy, but the results are well worth it as long as you give all you got!”