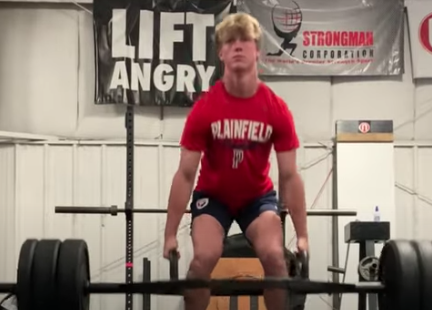 Hunter Hrbek is a recent 2021 graduate of Plainfield High School and has been a valuable member of the Unbreakable Athletics Community for the past 7 years. Hunter is an exceptional student. He was a member of NHS, and ambassador, as well as a member of FCA. During high school, Hunter played defensive back for the Varsity football team. When he was younger, Hunter played outfield but in recent years became a catcher for the Varsity baseball team. Hunter is the oldest of three boys, and his brothers and Mom Traci also train at UAA. During his time with us Hunter has grown and so has his strength, endurance, mobility and speed. Currently Hunter can bench press 285, back squat 405 and power clean 275. His fastest fly 10 was 1.04. “Some advice I would give a new athlete to our gym is to start training as soon as possible. If you want to be at your peak performance by the time you are in high school or college starting early is essential. My favorite part of training at Unbreakable is being able to train with other athletes that will push you to be better and make new friends.” Outside of training and sports Hunter enjoys fishing and spending time outdoors with his friends. Getting to know Hunter has been a privilege. He is a disciplined athlete who works hard and is extremely coachable. He is consistent in his training and has a positive attitude. He listens and encourages other athletes. Most notably is his humbleness. Hunter is strong, fast and a great kid. He did not want to boast about any of his accomplishments, but we can let the numbers and video do that for him.