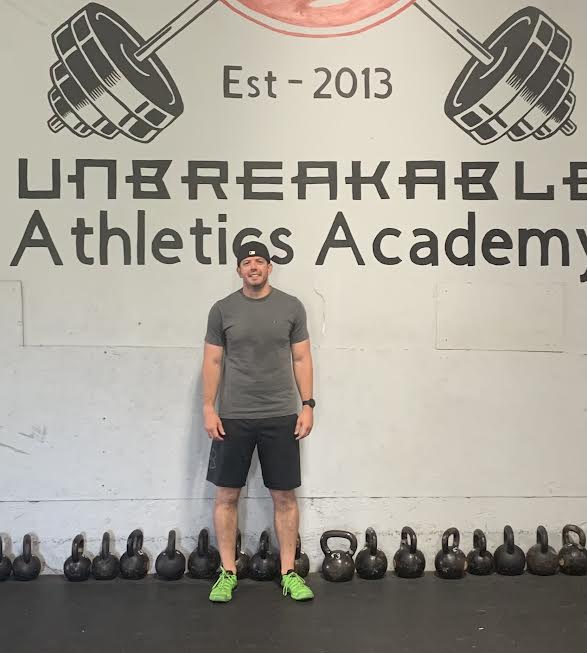 Steve is 37 and is originally from Portage, Indiana. He went to IU (go hoosiers!) for his undergrad and his MBA. He now works for Cummins as the Director of Accounting Research and Policy. He lives with his wife Ashley and his two sons Ben (9) and Sebastian (6). Steve’s son Ben was participating in the sports performance training sessions during his baseball team’s off season. Steve would often bring Ben to UAA and stuck around to watch. He instantly thought, “This is great! I really should be doing this!” Steve joined before the shutdown, but became consistent in October 2020. Before coming to UAA, Steve solely focused on running as his means of training, and as a way to stay in shape. Steve ran cross country and track in high school and walked onto the track team at IU. If you’ve ever trained with Steve when there was a running WOD then you know, he is quick! Over the next 10 years or so, Steve would run regularly for fun and enter a local race here or there.  Then, he got the itch and signed up for a marathon and started seriously training again. During training for his first marathon, he started having Achilles issues.  During the third (and final) marathon training, he had a disc issue in his back, which then led to hip issues and months of PT and not running.  That final marathon was THE goal for Steve. Boston. It had been his training focus for two solid years.  Steve eventually did end up “jogging” it for the experience with the thought that he would be able to get back and race at a later time. That was four years ago, and Steve still can’t put together more than a few weeks of solid mileage without some type of injury popping up.  He then knew something needed to change. At first, Steve was apprehensive. He was afraid of injuring himself. Given his past training/injury history he was nervous about getting hurt. He had never really done much strength work before, so it was all new to him. He credits our phenomenal coaches for easing his fears with their constant support, feedback and cues. “When I joined UAA, I knew I was weak, inflexible, and imbalanced, but I didn’t know how bad until I started getting into it.  There were a lot of frustrating days.  Mentally, I thought I could power through it, but I didn’t have any base to rely on to actually do that and that was a struggle for me.  Once I realized the similarities with running and there is a progression/certain building blocks you need to hit, the gains really started.” Since joining UAA Steve has seen significant improvement across the board in his strength, mobility and endurance.  Lately he has spent a lot of time ringing the PR Bell. His favorite strength movement is box squats, and he recently split a pair of running shorts up the back while training. He found the humor in the moment, but it was also confirmation of the progress he was making. Steve is consistently getting stronger, he works to have good form in his movements, and he has a great attitude.  You can find him after class doing the accessories as well as extra work before and after class. Steve is committed to becoming stronger and healthier. Do you want to know the best part of it all? Steve has been injury free in 2021. That is definitely something to celebrate and be proud of.