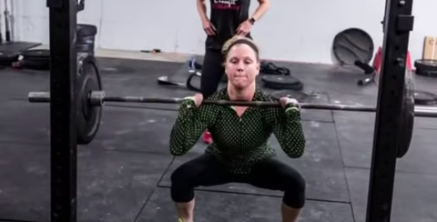 Traci has been an incredible asset to our Unbreakable community for the past 8 years. She lives in Plainfield with her husband Paul and three boys Hunter, Harrison and Hayden, all of whom participate in the sports performance program. She is a Plainfield High School alum and a graduate of Purdue University.  She worked at Peyton Manning Children’s Hospital for 18 years as a Child Life Specialist. While in school, Traci played softball and swam. Once she graduated, her focus shifted towards cardio, cardio and more cardio! She has always included running into her training and previously took group cardio-focused classes and competed in triathlons. It wasn’t until she started attending class at UAA that she became involved in strength training. Traci was introduced to UAA by friends and neighbors.  They talked her into giving it a try, and she hasn’t looked back since. When she started, she was self admittedly nervous.  She was unsure what the movements were, the rep schemes seemed confusing. It was all foreign to her.  Her first workout with us was “Filthy Fifty”. It didn’t scare her away. If you have trained with Traci, you know she doesn’t shy away from a challenge. Traci makes training a priority. Not only is she committed to the time in the gym, she uses every minute and often completes the Fitness, Strength, Metcon, Accessories, and more often than not can be found running with friends before she is finished. She is an excellent team mate and sets an exceptional example of hardwork, determination, integrity, teamwork, and enjoyment. She always has a positive attitude, is helpful, and amiable to everyone. During her time training at UAA, Traci has seen great success with barbell movements. While that aspect of training was difficult for her in the beginning of her journey here, she now finds that she is able to RX the weight for most wods and complete the movements much faster than several years ago. Her favorite movement is hand stand push ups. While upper body strength is Traci’s favorite, she has seen the most improvement in her deadlift. Her favorite WODs are  Annie, Unbreakable Wod and Murph, which she proudly completed with a 20# vest. If you know Traci, you should not be surprised by that. She just doesn’t stop. With that being said, Traci is always working and striving to improve.  In the near future she hopes to get better at some gymnastic movements. Getting a muscle up and handstand walks are on her list of goals. She also wouldn’t mind trying another sprint triathlon- anyone want to join in?!? When asked how the UAA community has helped her, Traci emphasized the connections she has made.  She looks forward to training with like minded individuals, everyone cheering each other on, and wanting each other to succeed. Traci says because of our community she has grown so much as an athlete in her 8 years at Unbreakable. There is no doubt that she has also left an imprint on others. Thank you, for being you, Traci!