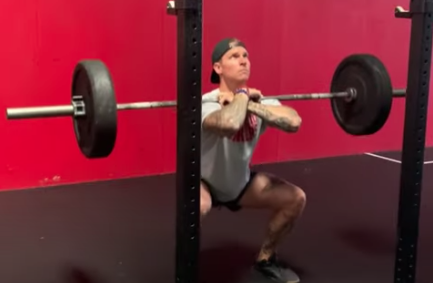 Zach Gadawski has been training with us since October 2020. Originally from Ontario, Canada, now Zach works as a Sergeant with the Plainfield Police Department. Before joining our UAA community Zach was growing tired of the “Bro Split” routine he had been following for 17 years. He realized he had been neglecting the most important muscle in the body – the heart. When he joined he had absolutely no experience with Olympic lifts and was apprehensive about it. Zach has shown incredible discipline and has improved in strength, cardiovascular endurance and has seen quite a few PRs

. One thing amongst many that stands out about Zach is his movement standards. He works incredibly hard to perform all movements as intended. His reps are solid and he doesn’t cheat a movement just to move a big number. This past Memorial weekend Zach experienced his favorite moment so far at UAA. Completing Murph, vested, and he absolutely rocked it. He has shown great improvement since starting with us on his 1RM in his back squat (#315) shoulder press (#175) and his close grip bench press (#275). You would never guess by watching this video, but Zach’s least favorite movement is the thruster. This is another example of his commitment to being the best he can be. Willingly choosing to complete a hero WOD full of a movement he dislikes, and still training with integrity. In the near future Zach hopes to get an adequate amount of sleep. He believes it is the most underrated skill in health and wellness. “Training is only 1 hour a day. Growth happens during the other 23.” A desire for longevity and being around for his family motivates Zach to continue training. When asked about our Unbreakable community he replied, “This community won’t hand you anything. You have to earn everything you want at this gym. They hold you accountable, but they won’t leave you behind.